[image: image.png]
– The panelists in the clip discussed making a transition from the “egg growing” old method of making vaccines initiated in “1947” – In clip, Fauci complained of having to “prove this thing works” due to the clinical study phases in traditional proof of new therapies which he said takes a decade – They proposed an “entity of excitement” in a “disruptive way” to push the new mRNA technology to the world to cut through bureaucratic issues – Bright says “But it is not too crazy to think that an outbreak of novel avian virus could occur in China somewhere. We could get the RNA sequence from that.. to a number of regional centers if not local, if not even in your home at some point, and print those vaccines on a patch of self-administer.“
*More here*: newsrescue.com/explosive-video-fauci-hhs-in-2019-plotting-disruptive-new-outbreak-in-china-somewhere-to-blow-the-system-up-and-enforce-universal-mrna-vaccination/ 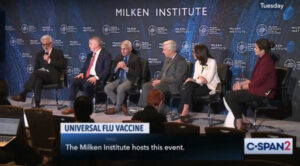